Breaking the Rules of Writing

Every writer worth his or her salt has heard about the rules of writing.  Show, don't tell.  No info dumps.  Drop the adjectives and adverbs.  Stay focused on characters.  Tell the story through a character's eyes.  It's all enough to make your head spin.

If you've ever seen Pirates of the Carribean - The Curse of the Black Pearl, you're familiar with the famed Pirate's Code.  You're also familiar with Captain Barbosa's famous quip that "the code is more guidelines than actual rules."  Writers would do well to remember this. 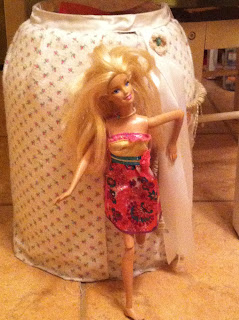 (Normally Barbie couldn't run with only one leg, but she could if you gave her a prosthetic)
I've seen far too many writers get tripped up by being so stringent in following the rules that they forget to give us a good story.  One of the biggest is in the Show versus Tell dichotomy that runs through the writing world.  We are always told not to just straight tell the reader what a character is thinking or feeling, but rather we're supposed to show it through actions.  Unfortunately, doing so sometimes distracts from the scene we're trying to develop.  The occasional telling of something in one sentence that showing might take three to do could allow us to get into the meat of what we want to get across.  In other words, we don't always have to have the character's face fall or describe them sitting all alone in a dark room; we could simply say, "Patti is depressed."

The focus on nothing but characters is another thing writers focus on to a fault.  Don't get me wrong - I love reading about folks I'm emotionally invested in.  However, there are times when the story matters more than who's in it.  Harry Turtledove does wonders in describing a world where the Confederacy won the Civil War and what the ramifications of that would be.  Yes, there are characters that move the story along, but they're merely traffic cops making sure we don't get stuck in the middle of the road.  He kills off these people with reckless abandon, but he always moves the story forward, from a Second War Between the States, to the end of a World War that pitted the Confederacy and England against the United States and an Imperial Germany.  Getting us from 1862 to 1945 was the most important part, and the folks that got us there were always bit players, replaced whenever the story needed to move to the next event.  It's rare when this is a viable option, but that doesn't mean a writer should be afraid to explore the possibility.

Great writers know when to break the rules.  Unfortunately, far too many are afraid to leave the confines of what society at large finds acceptable - the publishing world, in this case.  This limits what the writer can accomplish and leads to stale books.  This is exactly why a book like Charlotte's Web, a children's novel that took on the taboo subject of death, becomes an iconic classic.  It breaks the bounds of what writers thought was possible by ignoring the conventions of the time and plowing into unfamiliar territory.  Not every writer will be successful, nor will most stories break out, but without flaunting the rules from time to time, we'll be denied that next great masterpiece.  I find such a possibility beyond boring.  How about you?
Posted by RD Meyer at 8:00 PM

RD Meyer
Western Tennessee, United States
I'm a retired US Army Officer and an award winning author with five novels to my name - Akeldama, Salvation Day(IndieReader Discovery Award for Paranormal Fiction, 2018), Wrongful Death, Schism, and Homecoming. I lived in Hawaii for seven and a half years and moved back to the mainland in June of 2016 before finally settling in Tennessee in 2019. My wonderful wife Sherry and incredible daughters Rachel and Amelia help support my eccentricities and keep me sane. Hopefully others will enjoy reading my bizarre tales as much as I enjoy writing them.